Our News and Awards

National Guild of Removers and Storers

We have won numerous awards with the National Guild of Removers and Storers. This includes:

The Annual Certification of Excellence

This award is presented every six months, between January and June, and July and December. We’re proud to say that we won this award in every six month period from January 2005 to December 2018 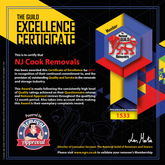 Over 98% of our customers have rated us as “excellent” or “good” in our quality questionnaire. Look at our testimonials to see exactly what they said.

Call us, in Eccles, Greater Manchester, to find out more about our removal company.

© 2022. Thomson Directories Ltd. The content of this website is owned by us and our licensors; copying of any content (including images) without our consent is in breach of our T&Cs |All rights Reserved